Lossless High-Resolution Audio on a Disk

The Failure to Deliver

One solution is to set up a music server using a PC or Mac. We wanted to play high-resolution surround sound in our listening room here at Benchmark, and we wanted to be able to demonstrate high-resolution surround sound at AXPONA 2015. Our solution was to set up a PC-based music (and video) server. We used a Blu-ray equipped PC running Windows 7 and the JRiver MediaCenter software. A multi-channel digital interface was required to send high-resolution digital audio to 3 or 4 external Benchmark DAC2 converters. We selected a Lynx AES16e PCIe card which provides 16 channels in and out at up to 192 kHz. The 16-channel I/O provided by the Lynx card is overkill given that we only need 6 output channels for 5.1 or 8 output channels for 7.1. Nevertheless, this card is one of the lowest cost options available, and it is very reliable.

Our server is a fairly ordinary desktop PC, but I will include the details of our system so that others can select components of equal or higher speed. We started with an HP Pro3500 PC with an Intel Core i5-3470 CPU operating at 3.20 GHz. This quad-core processor has the power to keep up with the demands of simultaneous high-resolution audio and video decoding. In most cases our CPU usage peaked at about 15%. Our machine is equipped with 4 GB of RAM. We removed the stock hard drive and installed two 2TB SATA hard drives in a mirrored RAID 1 configuration. We needed lots of storage space, and we wanted the redundancy of a mirrored configuration. The RAID options are built into the SATA controller on the HP motherboard and can be configured in the boot-up screens. We installed an LG WH16NS40 Blu-ray drive with a SATA interface and a 16x transfer rate. We opted to use the built-in motherboard video controller which is an Intel HD Graphics adapter with 64 MB of dedicated RAM. It supports DVI digital video outputs at 1080p. We inserted the Lynx AES16e card using one of the available PCIe slots. No other cards or hardware options are installed in our server.

We installed a fresh copy of the Windows 7 Professional 64-bit operating system. We installed Microsoft Security Essentials because it seems to provide resonable virus and spyware protection without bogging down the machine. We then navigated to Lynxstudio.com and downloaded the driver for the AES16e card. We then installed the JRiver Media Center software version 20.

Many of the high-resolution audio disks produced by AIX Records are unencrypted. The Disks from other record companies are often encrypted and additional software may need to be purchased to play these disks. Recommendations are available in the JRiver help files.

It is very important to set the CD ripping encoder to a lossless format before ripping any CDs to your hard disk. We selected Windows Media Lossless under Tools/Audio/Encoding/Encoder. Other lossless formats such as FLAC and ALAC are also great choices. All will provide identical bit-accurate quality.

Enable the Media Network (Tools/Audio/Media Network). The media network allows bit-transparent DLNA transmission of audio over WiFi and ethernet connections. When properly configured, audio can be sent to or from a smartphone, tablet or PC. DLNA also supports the transmission of video and still images between devices. You can use this function to view photos from your smartphone on your computer screen.

Add the JRiver Gizmo application to your smartphone. All JRiver playback functions can also be controlled using the JRiver Gizmo application for Android devices. The Gizmo app provides a remote control with album artwork displays and is very cool. A Gizmo web interface (WebGizmo) provides the same functions without the need to download an app, but this solution is slightly less convenient. The WebGizmo web interface is currently the only option available for Apple iOS devices.

Channel assignments are as follows:

The Benchmark DAC2 DX converters are equipped with AES XLR inputs. The outputs from the AES16e card can be connected directly to this input on the DAC2 DX. Three DAC2 DX converters will be required for 5.1, four will be required for 7.1. All DAC2 converters will need to be set for volume control bypass (JRiver will control the volume). The DAC2 bypass function is programmable per input and can be enabled for the AES input only. 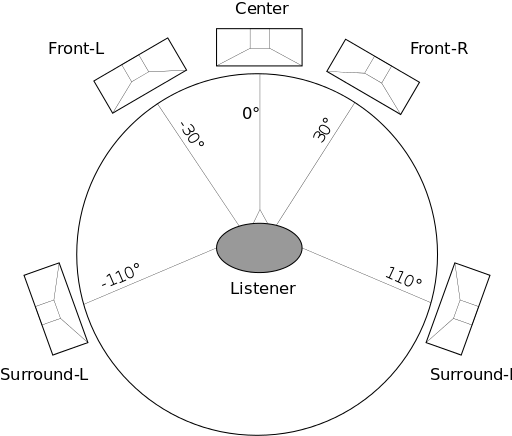 We have the following signal chain in our listening room:

We will be operating the following signal chain at the AXPONA 2015 show:

The system will also include two Revel B112 subwoofers for the LFE channel.

We will be playing lossless 96 kHz 24-bit 5.1 recordings from AIX records. Most recordings will also include HD video which will be displayed on a JVC 4K projector. Our objective was to put together a multi-vendor system that uses the very best components available. Don't miss this opportunity to hear an absolutely extraordinary 5.1 system.